It is safe to say most of us reached retro card saturation sometime in the early to mid-aughts.  The Topps Archives and Topps Heritage sets in 2001 begat Upper Deck's Vintage and Decades series and opened up a floodgate of reprints, design reuse, and pseudo-retro sets.  Sometimes it is refreshing and neat but most of the time it is gratuitous and poorly executed.  And since Topps keeps pumping out their Heritage and revamped Archives sets over and and over, year after year, we get very little variation in the presentation of our nostalgia.

Enter Topps Super 70s Sports Baseball.  If you recognize the name and follow this dude on twitter, you know the whole tongue-in-cheek schtick this feed has.  It posts multiple retro photos a day with an amusing over-the-top caption to it to inflict an emotional response: sometimes good, sometimes bad, sometimes ridiculous.  When I saw they had teamed up with Topps to put out a card set, I couldn't resist.  Lemme tell you, they had me at the graphic on the box: 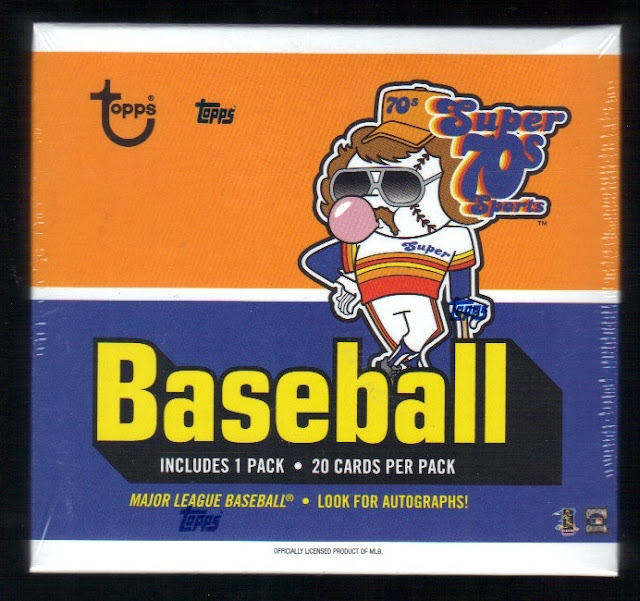 When I saw the design of the cards, I knew immediately that they were going for someone like me who wants the vibe of old school cards but not the horrible repetition the whole parade has become.  If you are as much of a card nerd as I am (and if you are reading this blog, I assume you are) you recognized the elements right away: The script team logo from 1978, the pennant flag from 1977, and the ribbon from 1979 (or 1974 perhaps?) all remixed and reorganized into something organic and new.  It's like hearing a perfect cover version of a popular overplayed song that makes the whole thing come alive again.

I pre-ordered this stuff, which I NEVER do even for Ginter or Heritage, back in early November.  I got a late Christmas present when they arrived on Boxing Day.  And yup, I love them as much as I thought I would. 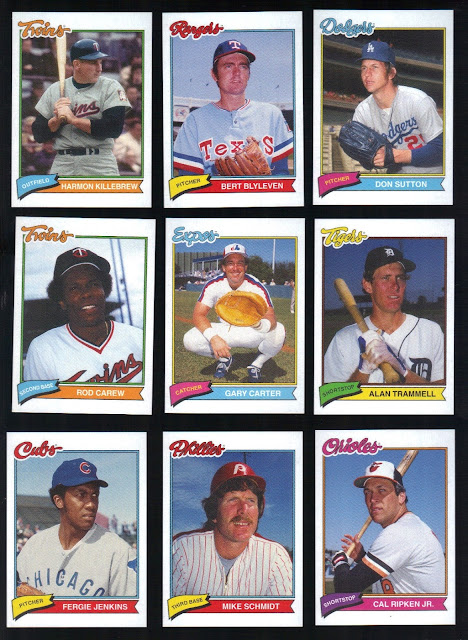 First and foremost, new photos!  One of the huge complains I and so many other collectors is when they put old guys on new cards, they use the same pictures over and over and over and over again.  I know I have written about it and I know other bloggers have too so when I see new shots from the no doubt bottomless pile Topps should have, it makes me very happy indeed.  The other thing I noticed right away is that they feel right.  The vintage cardboard is always a plus on these sets. I know shiny white glossy paper looks better but when you are doing this sort of thing, it really should be thick and pulpy and dull.  It makes the backs look right too: 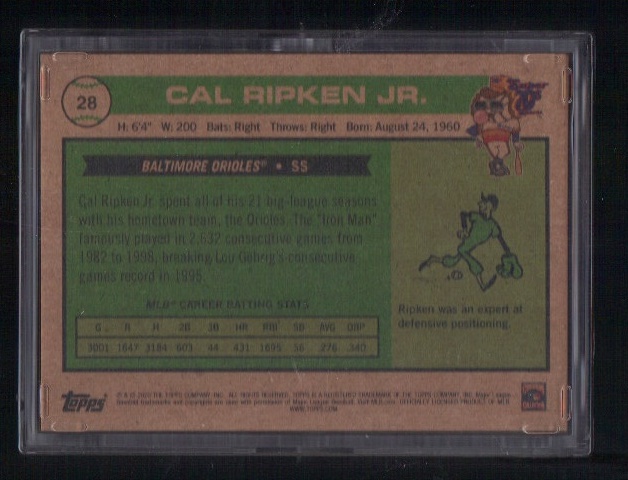 I probably should have scanned more backs but the cartoons are wonderful and they look new though someone with more knowledge than me could probably figure out if they are reused.  Either way, they let a third of the back be the comic and I am more than okay with that.  The backs themselves are in the color scheme of 1977 or 1979 with the ribbon from '79 featured.  I was kind of expecting the humorous tone of the S70sS Twitter feed in the write-up but they are pretty straight forward.  I doubt Topps would want to alienate anyone with a Kevin Costner joke on the back of a Cal Ripken card (google it).

Lets look at all of these beauties.  I even got a nice little hit: 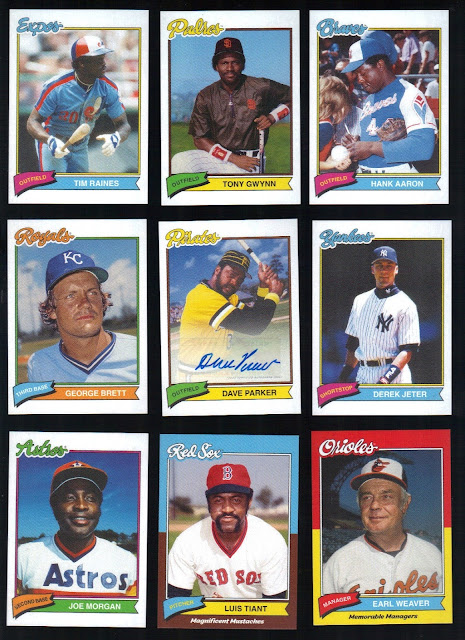 That's a Dave Parker autograph in the middle there.  I didn't have a Cobra signature in my collection so that one is going to stay.  The last two cards are themed parallels that add the colorful banners of 1975 to the mix.  I think it might have been too much to ask for the whole set to look like that so that is a nice addition and kinda what parallels should do in the first place.  I might need to look into making an entire page of the Magnificent Mustaches.

They did modern players in the set too, which is fine I guess but certainly not what I came to see.  Scherzer and Turner certainly fit in with a 70s theme, Cole and Soto, not so much.  Full disclosure: I am easily old enough to be Juan Soto's dad. 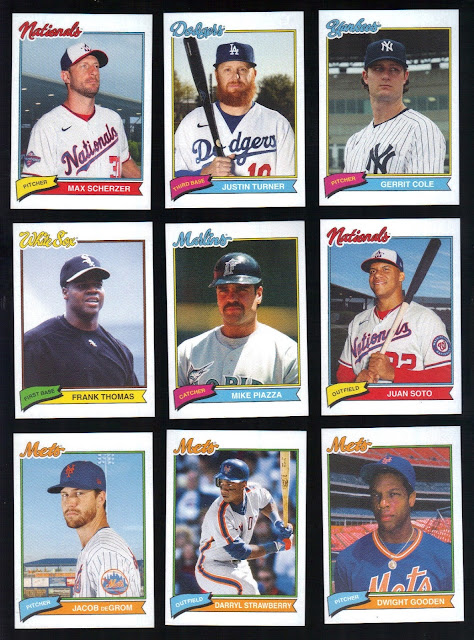 You may count more than 20 cards, that's because I also pre-ordered my favorite players, the Gary Carter, the Frank Thomas, the Mike Piazza (amusingly shown in his Marlins uniform), and of course the Mets players there on the bottom.  A wise decision since I didn't get any of them in my 20-card box.  These cards are easily the collecting highlight of the dumpster fire that has been 2020.  If you were on the fence about getting any of this stuff because you don't like all the faux-vintage that gets churned out, I suggest it highly.  I hope Topps learns from this and does more fun sets like this rather than just reprinting all their old cards.

Thanks for showing off the pack! I saw it at the LCS but didn't think it was a new set for some reason. I was slightly disappointed that they have recent stars in the set (I assumed it was just gonna be players from the 70's), but the set was saved by the Memorable Mustaches subset!

As a fellow '70s fan, I do not like this as much as you. The inclusion of current stars is annoying and the design is a mish-mash, which I guess is OK, but I was expecting better.

My brain also has a huge issue with the photos chosen. Joe Morgan is an Astro? OK, he spent the early part of the '70s with the Astros, but they used a photo from his return to the Astros, which wasn't until the '80s. The Schmidt photo is from the '80s, Reggie should have his trademark '70s glasses and stash, Sutton his perm, etc., etc. And Frank Thomas should be nowhere near this thing.

I know it's supposed to be more the "spirit of the '70s" than actual '70s dudes but I can't separate the two. I'll probably wait until singles are out on the market and then pick off the few cards that don't my brain hurt.

Oh yes, Night Owl, I wish this was more like the UD Decades set from 2001 that stuck strictly to the 1970s. Tony Gwynn and Tim Raines (nor Darryl Strawberry or Doc Gooden for that matter) and current players definitely shouldn't be in this set with what it seems they were going for, but Topps is going to Topps and they have their way to do things now and we aren't going to change them.

I think things like Mike Piazza as a Marlin and Joe Morgan in the 1980s Astros uni might be more of a gag in line with the Super 70s Sports twitter feed brand, but I'd have to see more cards of this ilk to go with that theory. Really, though, looking at that Hank Aaron card or that Mustache Tiant card, I am willing to forgive some of its other modern sins.

I preordered the dodger team set as soon as I saw these on topps' website. I'm not disappointed although it could have been better executed for reasons already stated.
Any time topps shows confidence in even a portion of the 1978 set design, I'm hopeful for a larger scale appearance of it in archives.

Congratulations on pulling the Parker. I've got mixed feelings on this product, but the seeing current (and even 80's and 90's) guys in a product marketed for 70's fans is the deal breaker for me. Other than that... the product isn't too shabby.