After the pandemic struck and we all went through several rounds of the Kübler-Ross stages, there was a calm when most of us decided "OK, I have all this time on my hands, I am gonna do something important!" and we made plans to learn a craft or go back to school or remodel the house or invent a better mouse trap or focus on our hobbies or whatever.  It's always best to think big so that the actual plans can find the right size but also, reality eventually says that our plans will be big but our follow through small.  At least that seems to be the way things go for me most of the time. Well, I already went back to school a while back, and my house is just fine the way it is, and my inventing skills are nil, so that left me with my hobby.  I did throw myself into my collection in a lot of different ways the last couple years, pruning some parts and expanding others.  I bought some cards I always wanted and got rid of ones that did not spark joy.  In keeping with the Mary Kondo theme, one thing I really lament from my long term collecting history is that a long time ago, I sold off all my vintage Topps sets.  I had built a 1969 set, a 1972 set, and as you can probably tell from the thumbnail of this post, a 1975 set. Given all this time on my hands, I decided to rebuild one of those sets and since the 1975 set is my favorite (for many reasons we'll get to) that was the one I went for.

The pandemic has made it almost impossible to go out and buy cards in a store but the online offerings exploded.  I had my choice of a few nice starter sets and I picked one that had a few of the key rookie cards (Rice, Yount, Hernandez) and then added my back up Gary Carter to the mix.  I then made it a challenge for myself by making my set build a low budget affair.  Sure, I could have just went to ebay and nabbed a few other common lots or just paid for hall of famers but instead, I built most of this set through my own collection, reddit trades, Listia listings, and a great serendipitous find: I got my Brett rookie for nothing because a friend was updating his 1975 set to PSA quality.  He bought a PSA 9 and gave me his old, just fine, ungraded #228. That was nice.

So on and off for the last 18 months or so, I have been accumulating cards. A trade here, a find there, a listia seller had a bunch of commons one week.  Slowly but surely, I hammered it down to a final four: three random commons (all in the 500s, as though the 1975 set had high numbers or something) and one of the Mantle MVP cards that for some reason, everyone was hoarding.  Well, I did finally get that Mantle and then I treated myself to buying the final three from ebay to finish things off.  You are now looking at me triumphantly placing those cards into their spots in the binder. 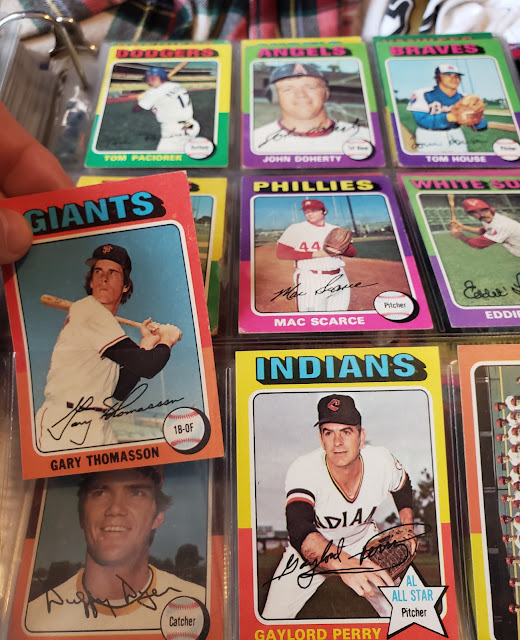 Gary Thomasson slides in nicely next to Gaylord Perry, who has one of the nifty All Star logos from this set.  You can also see on the page one of the team cards, a lot of mine have pen marks on the checklist but this does not bother me in the least. I was not very picky when it came to condition. As long as it didn't look like Night Owl's original cards, I was okay with it. 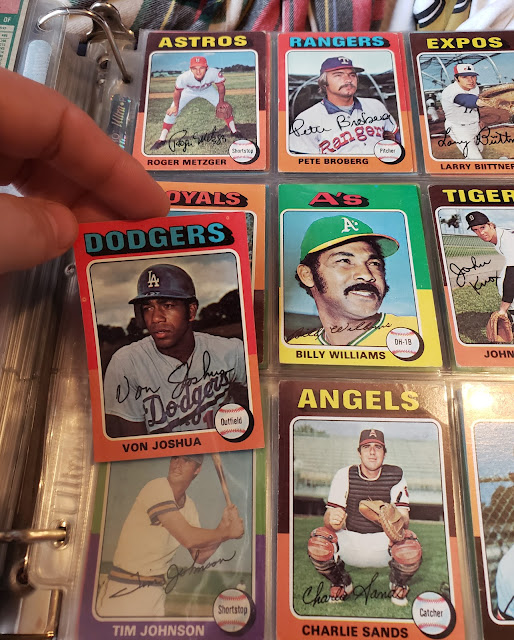 Von Joshua finds his spot here as the penultimate card.  I always thought Von Joshua should be a classical pianist, not an outfielder, but hey, who am I to judge. He was a major leaguer and I wasn't. You can also see on this page that Billy Williams is sadly off center and I will have to perhaps replace some of those.  Maybe during the next pandemic... 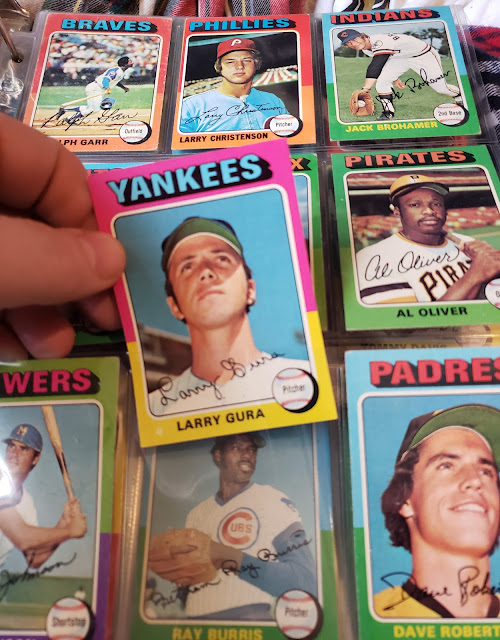 And here it is, the final card, #557 Larry Gura.  There is a fun irony of him being shown as a Yankee since his reputation was that of Yankee Killer later on in his career.  Of all the iconic cards in this set, this one was the last one; not epic but it will do.  Al Oliver looks a little jealous over his shoulder. 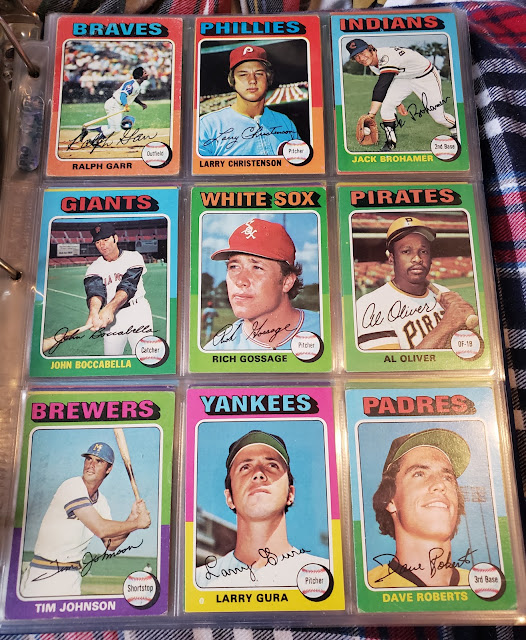 So there it is, I set a goal and accomplished it.  It took a year and a half and some time and patience, but I rebuilt my 1975 Topps set.  I love this set because I was born that year, I love this set because it is garishly bonkers colorful. I love this set because it has the rookie card of my favorite player of all time, Gary Carter.  But now I love this set even more because it will always remind me of a very trying time in my life (and all our lives) but that we made it through.  It will remind me that I can set reasonable goals and follow through on them.  I will be keeping this one for the rest of my life and passing it on to one of my nibblings, with the story of its acquirement (lucky too that my nieces and nephews have already shown great interest in baseball).  It is not perfect by any means, but it is a perfect trophy of the last two years.  And now I have to decide if I want to redo those 1969 and/or 1972 sets.  If we don't all die in a nuclear war in the next few months, maybe I will choose one and get back to you.

Congrats! I've been slowly building this one for a few years; up to 85%.

A worthy endeavor for sure. Congrats on completing it.

Congrats on completing the greatest set of all-time! The only set I can say I collected in 1975, in 2004-05 and now, with the buyback set.

Nice job! Gura is one of my more obscure PCs. I find it more memorable when I finish a set with other than big stars.

I have a bunch of '72s that would fit with your '75s if you get the inclination later...

I think '72 is the next project. Email me with what you have and let's see if we can work out a trade or something.

It's the first set I've built twice, not counting 1987 Topps because I built that twice in 1987. And probably could do it a few times over again if I cared to. So much wood grain.

Congrats on the completed set! Luck always has to fall your way on quests like this!