Happy Birthday To Me.

So Friday was my 47th birthday, a most nondescript age to turn to say the least.  I took the day off to have myself a nice four-day weekend. Of course, as much as having 96 hours to do nothing would be ideal, one has to use at least some downtime for the errands one must attend to.  Being a grown up is lame. But I decided while I was going to be out and about to at least also attend to some of my childish amusement which means baseball cards, of course.

Having recently finished my 1975 Topps set, I've taken on the challenge of the 1972 set next.  I know this one will take years (it took me years to build it the first time). I've gathered all the stars I have and bought myself a nice starter set at a decent price. But while I now have a good 80% of the first 653 cards, after that - the dreaded high numbers - I only had 4 of them. So I know it is a long term task ahead of me. 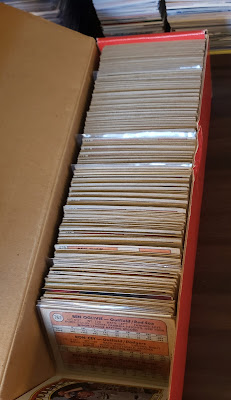 Ah, but this is where some serendipity comes in, even more than my '75 set had.  I was around a comic store I know has card supplies and some boxes of random sports card stuff. I have spoken of this place before. It is always a fun visit to a joint that has been good to me before but I doubt it will ever be better than this. 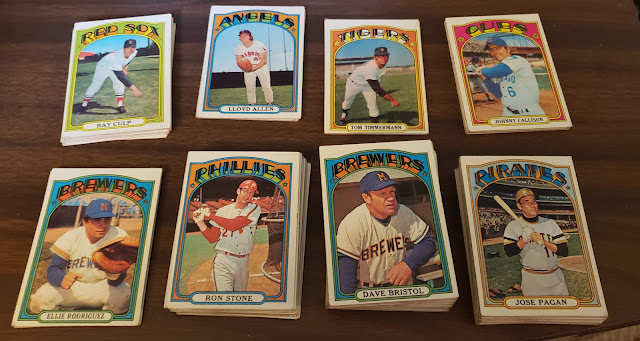 I decided to start my '72 set officially two weeks ago and aside from my initial gathering hadn't done anything more. Heck, I haven't even put together a want list yet. (UPDATE: Yes, I have, in my brands and sets wantlist tab) But as I dove into the dark vintage old school cardboard section of that quarter box, it was like some kind of wild daydream. It was loaded with 1972 Topps. And not just any kind of 1972 Topps, I immediately recognized these cards as high numbers. And there was not just three or four of them, there was dozens of them.

Obviously, it is clear that a comic shop might not be well versed in what they had in this vein of cards and I didn't feel it was my place to tell them. I mean, it's not like there was the Nolan Ryan or Frank Robinson traded card in here. But the Rick Wise traded card was in there. And about 60 other high numbers. I asked and made sure the unsleeved vintage was a quarter and I was told yes so I just went with it. All in all, I nabbed 90 or so total that I needed for my new set. And I got those high numbers for a quarter a piece; I couldn't have done that the first time I built this set in the late 90s. I should feel guilty but I don't. I also got a huge lot of series 5 original Star Wars cards too at the same price, but that is a different post (and they should have known better about those). There was also a bunch of other vintage stuff in there, some 1968 commons that I couldn't resist and some '70s team cards. Along with a shiny new binder and a big monster box, it was quite the trip and turned out to be a glorious, unexpected birthday present for me. I'll have a new list up soon for the '72 set soon and I even have a few high number doubles to trade. Try not to take horrible advantage of me.

Well, happy birthday to you! If gas wasn't $5 a gallon, I'd be driving there right now.

I can't imagine coming into a stash of old cards and not at least checking the prices before you put them out for customers.

Happy birthday! And hey, finders keepers - if it was one or two mispriced cards I'd consider mentioning it to the the people at that store, but it sounds like they didn't do their research.

Happy birthday! Getting '72 high numbers for 25 cents each is certainly a good present.

I have updated my brands and sets wantlist at the top of the blog to show my 1972 set needs.

Happy birthday from another 47 year old!

Happy belated birthday! That 1972 Topps set build should be challenging and fun. Best of luck. And can't wait to see the Star Wars post ;)

Belated happy birthday, and congrats on the excellent find!

Happy belated birthday! This is one of the better, if not the best, deals that I've seen anyone post about in a very long time.