I saw earlier in the week that it was going to snow today. Then as the days went by, the forecast got more and more dire and while it is not exactly Snowmageddon '17 out there, it is pretty bad.  In a rare case of thinking ahead, I stopped at Target yesterday early in the afternoon before the full French Toast Alert System panic set in and grabbed a box of the newly released 2017 Topps cards.  So now that I am housebound until the storm passes, let's take a look at what the flagship is giving us this year. 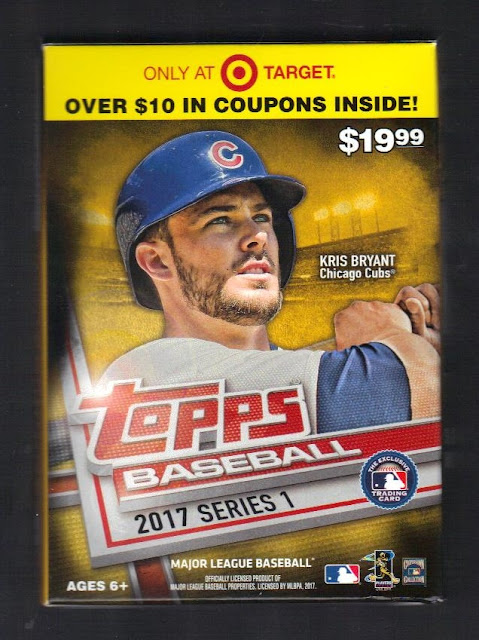 I wasn't posting last year when the 2016 stuff came out but I did see that the design was not at all lauded.  Pity because I kinda liked it.  I like the full bleed, I liked the photography, I liked the homage to 1988 and 1966 in the diagonal stripe. Yes, the white misty bits were distracting, but Topps made up for it, in my opinion, with the Snowflake release late in the year.  I am not sure if Topps was making up for a mistake or mocking itself, but it was a nice little quirk on the holiday design that helped out the one flaw in the original.  This is what we have this year:

I haven't really read up on this yet but I have a feeling this is going to be slammed as well.  I like the big photos and I like the layered look but the busy lines and the awkwardly angled logos are bound to bring out the haters.  I like that Topps once again showed some restraint on the foil usage only going with the Topps logos itself.  The only thing I really don't like is the font - it is too modern looking and bound to look dated in a few years.  Topps is also trying to get away from the glut of 3/4 action photos that ruined the 2015 set and while they are obviously there, the majority of the pictures look sharp and well chosen for the most part.

This is the 'Salute' insert series, which includes a number of ideas: Jackie Robinson Day, Throwback Jerseys, and the Legends.  I am going to throw this out there right away though: isn't this a much better and cleaner looking design than the base card?  It is less awkward, less likely to look dated in 5-10 years, and very easy on the eye.  Really, I think they should have considered swapping out the Salute insert design with the base design.

Also, why are there players on the Jackie Robinson Day cards where you can't see them in their #42 jerseys?  Doesn't that kinda defeat the purpose?  Legends is self explanatory, it is yet another excuse to shove in some old time players but at least the two I got here are different photos than the usual ones they use for Palmer or Koufax. Throwback Jerseys is an excellent theme for an insert set as long as you don't put the throwback jersey photos in the base series.  From what I have seen, this is not the case.  Oh well, they tried.  That last Stanton card is one of the foil parallels and you know how I like the shiny.

Here are the Mets players I got, all four of them out of 100 cards in the blaster. I must have gotten 9 or 10 Pirates and somewhere in Pittsburgh there is a dude with a shit load of Mets angry at the collation gods.  Such is life.  The Nolan Ryan is a reprint with an ad on the back for Bunt and Topps Now.  I am not 100% sure what that card is supposed to be, but hey, I'll take it.

Topps also made the choice to go with single League Leader cards rather than combo cards. I don't like this as I like multi-star cards and we get all the All Star and Home Run Derby cards in the Update set to highlight single players to give them multiple cards.  I hope this is just a one year detour.  I also didn't get any All Star Rookie Cup players.  Send me yours.

While the photography on the vertical cards is okay, Topps seems to have gone out of its way to choose dynamic shots for the horizontal ones - plays at the plate, diving fielders, full wind-ups and follow-throughs, etc.  I also find the design less distracting sideways; maybe they should have done the whole set this way? These are some good looking cards...

One last complaint about Topps' tone deafness sometimes.  That combo card is called B'more Boppers.  I have never heard Baltimore called B'more ever really but they could have amused many in and out of Charm City by calling it Balmer Boppers. Anyone in Merlin wanna dispute my thinking here?

Topps has a 30th anniversary insert for the 1987 set.  Topps seems to use this design a lot but I am not certain there is some kind of universal love for it. Or is this a new 30-year flashback thing they are going to do with sets?  This one has me perplexed.

One thing I will say is that Topps got the look of those 1987 backs correct. The right font, the right kind of write-ups.  But the deciding fatal flaw of the these and the flagship base cards is right there to see.  I hope you folks missed Donruss cards that much because they're back and their 'recent major league stats' are haunting the back of Topps.  This is would be a poor choice for some one-shot release in early June and it is inexcusable on the regular set.  These are the cards of record, they should have full major league stats.  It's a shame too, because the colors and design of the backs are legible and aesthetically pleasing.  Leave the uniform, half stat nonsense for the Lineage or Top-Tens of the world.  And the less said about the amount of space devoted to the Twitter addresses, the better.

Here are the other inserts and parallels that were in my box. Some new things and traditional favorites are here:

The Bowman Then and Now cards are almost like advertisements.  I am not a fan.  The Five Tool cards, however, are the right kind of busy and colorful with a sturdy baseball-related premise.  This is what an insert card should be. The Award Winners cards devote entirely too much space to the team name, and I guess that Topps got tired of giving Rawlings free advertising because they are just calling them 'Fielding Awards' which looks terrible. I am a huge fan of the First Pitch set and I am glad they are back.  I will be completing a page of them as I have the last couple years so if you need to get rid of yours, you know where to send them.  Last and least is the venerable Gold Parallel which I could hardly tell was a gold parallel. They probably should have retired these by now.  Do we really need rainbow foil and gold numbered parallels (much less all the other colors)?

I was promised a Jackie Robinson Day manu-patch card and I pulled Madison Bumgarner (clearly not showing he is wearing #42).  If Night Owl has taught me anything over the years, it is no one wants to have Giants on their Dodger cards or Dodgers on their Giants cards.  They are the two great tastes that DON'T taste great together.

If there is any card you have seen (including this one) that you would like to trade for or if you have a want list of base cards, feel free to email me or comment here and I am sure we can work something out.  Otherwise most of these are destined for eBay or Listia after I make a page, separate the Mets, and decide if there are any specific insert pages I want to make.  Now I have to go shovel and daydream about using those coupons in the warmth of spring.
Posted by jacobmrley at 2/09/2017 02:22:00 PM 6 comments: