Today is my birthday.  As a grown man (37 years and counting), I eschew parties and presents as the domain of children.  The people who love me do not shower me with trinkets or cards and do not call to wish me well...they show up with a Carvel ice cream cake or a plate full of cupcakes or heck, even an Entenmann's right out of the box.  I am not picky.  Now, it is not news that as a large man who loves sweets, I will sit through an insurance seminar if there is cake involved.  But make no mistake, there is only one thing and one thing alone that matters today: cake.

Thanks to the marvelous frivolities section of Baseball Reference, years ago I was able to pin down all of the major leaguers born on the same day I was.  Oh, I already knew a few.  I was at Shea Stadium on my 15th birthday when I learned that a rookie named Todd Hundley shared my birthday.  As a lover of all things Mets and Mets catchers especially, I became a Todd Hundley super-collector from that day forward.  I also learned that year that uber-rookie Frank Thomas and a prospect named Jeff Bagwell shared the same birthday in 1968 - May 27th.  I am not sure if it is narcissistic or pragmatic, but I also became a big fan and collectors of both those players as well.  I now collect any player that has my birthday and I have a binder that collects all my "Birthday Boys" together.  I keep a separate one for Hundley, Thomas, and Bagwell, so they are represented in these pages. 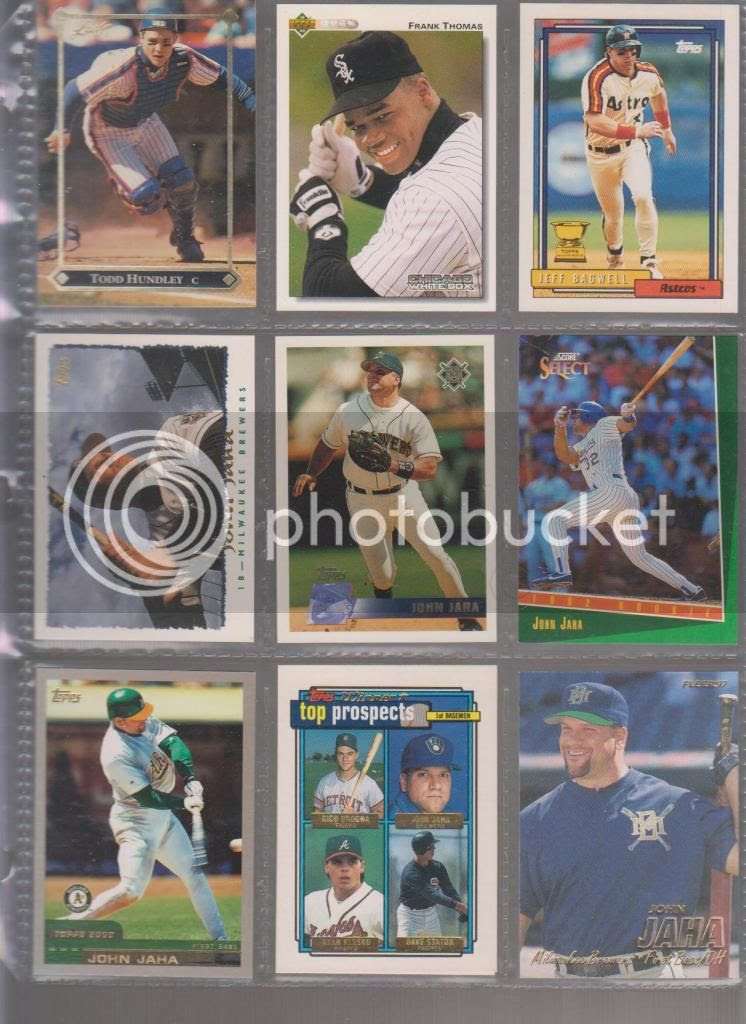 John Jaha, one of the all time best names to say aloud, was born today in 1966.  I never became a Jaha collector for some reason and these are the only six of his cards that I own.

These are some prospects that have my birthday.  Richards has made the show and shows some promise. 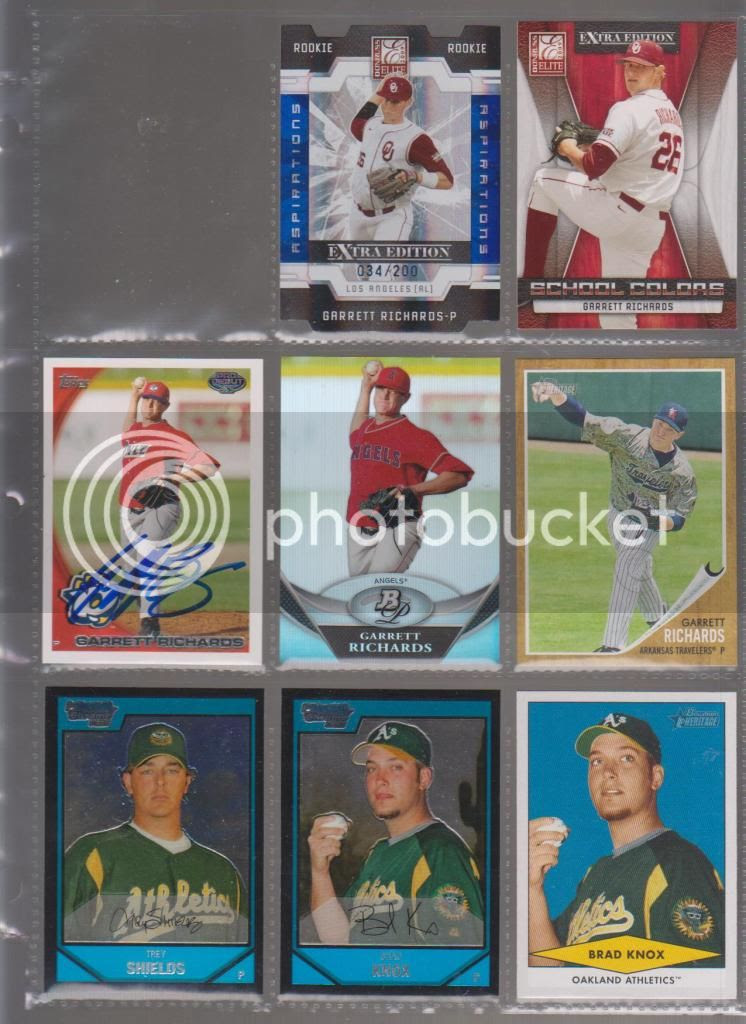 Brad Knox and Trey Shields, alas, never got to the Big Leagues.  But their DOB on their cards, though, got them in this book.

After the Big Three of Hundley, Thomas, and Bagwell, Mike Caruso was the next in line to break out and become a star with my birthday... 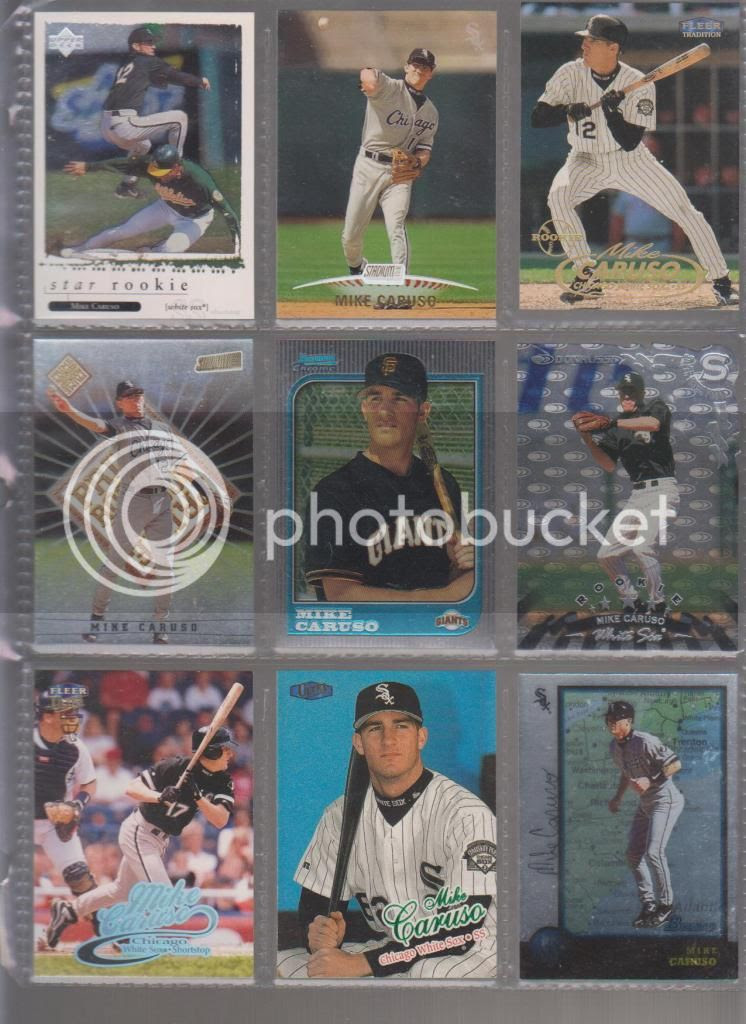 ...unfortunately, he flamed out and never really amounted to much.  He was out of the majors by the time he was 25.

Jacob Brumfield sounds like a British gent.  Instead, he was a marvelously sub-par outfielder from the 90's.  He looks like a ball player, but he didn't play much like one (70 OPS+ in 1747 PA - yuck). Also on this page is Chien Ming Chang, a Taiwanese player who has been in the WBC.  I caught that his birthday was mine on a broadcast and immediately went to eBay to pick up one of his cards.  Terry Collins, was for a while, the failed manager of the Astros and Angels.  Now his is the manager of my beloved Mets; I will have to find some more of his cards.  Those last three players are a trio of never-weres.  You will find that to be the case with a lot of these guys from here on in.

Like these five guys (mmmm burgers).  All the very definition of commons. Ah, but here is a tragic story.  Gary Nolan was Mark Prior before Mark Prior.  He had an electric arm and came up to the bigs at the age of 18 throwing gas - he even finished second to Tom Seaver in rookie of the year voting in 1967.  Alas, his elbow went early and while he became a finesse pitcher for a time, he never panned out to be the world beater his first few years would have indicated he would.  People rarely use him as an example of a pitcher who blew out his arm early from overuse.  Everyone seems to think every pitcher from the 1960's was Bob Gibson and Don Sutton.

Ahhh, back to the scrubs... 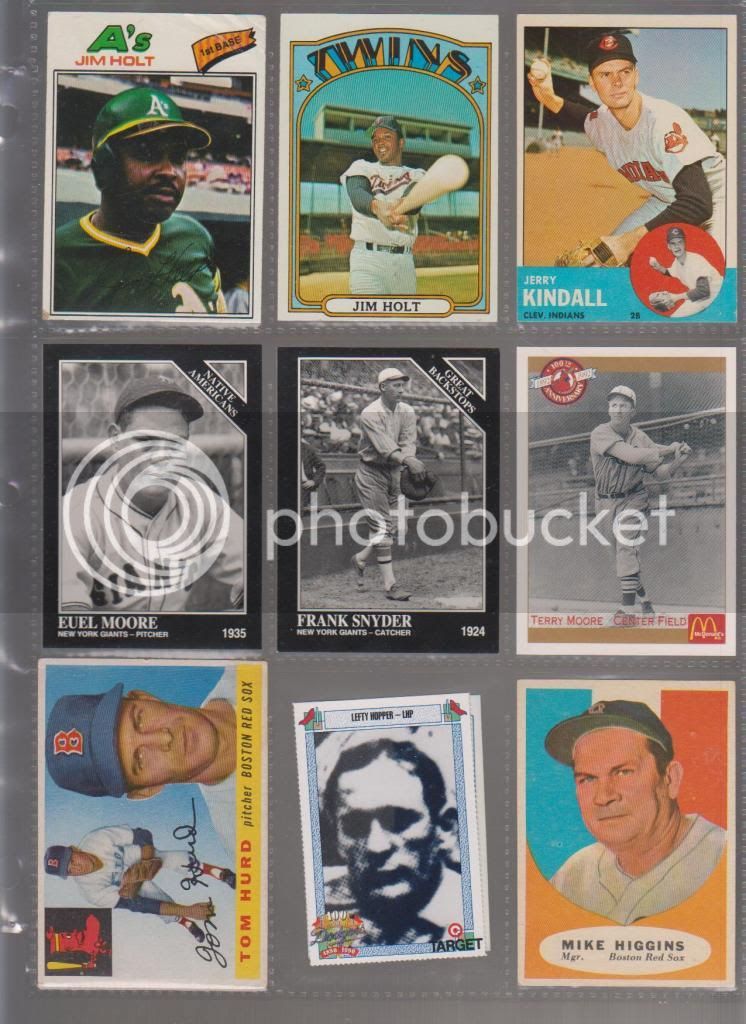 Terry Moore and Pinky Higgins had decent big league careers, but if it weren't for that one day in 1968, May 27th wouldn't have much to show for it in the major league annals.

Not being content to stay with just baseball, I checked for the basketball birthday boys as well.  I did pick up cards of the players I could find.  These eight players are about as underwhelming as you would possibly imagine. I read somewhere once that Sam Snead had my birthday, so I picked up one of his cards and his being here with these awful basketball players makes him the best athlete on this page by far.

About a million people will celebrate birthdays with me today, so obviously, there are some football players too. Antonio Freeman somehow got a whole page worth of cards in the binder.  Most of these are shiny...I imagine that is why.

Danny Weurffel played for the Saints, so he's got that going for him. I haven't checked the football site in a while, Nick Barnett was the last player with my birthday I consciously remember playing in the NFL.  With over 1500 players in the league, I am sure there are more.

Jackie Slater is by far the best NFL player with my birthday, he made Canton a few years ago. 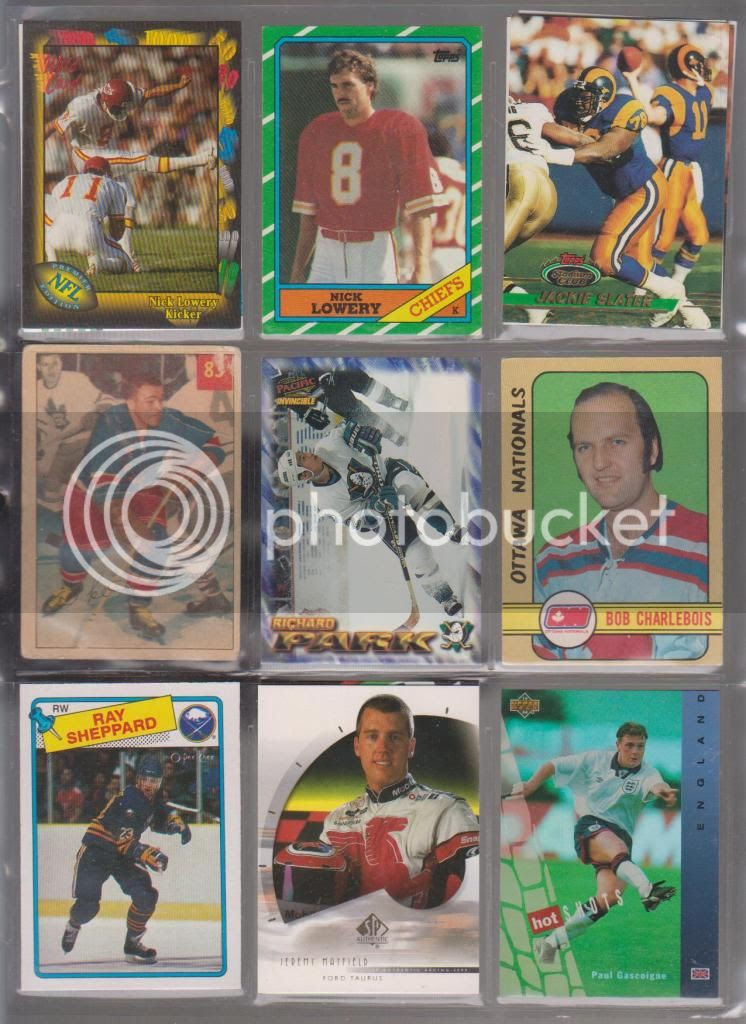 The NHL is represented here with a few players, but once again, I have not checked that list in a long time.  I am sure there are more than four players.  Jeremy Mayfield is a Nascar driver (strike one) who is a crack head (strike two) who also is a big jerk about it (strike three).  Yet my completist nature won't let me not include him.  Paul﻿ Gascoigne is a really good soccer player.  Good for him.

Lance Schulters was a pretty mediocre to pretty terrible defensive back.  He was also born the exact same day as I was.  So was Andre Savage.  So was Jamie Oliver and Andre 3000 (not shown). Happy 37th boys! 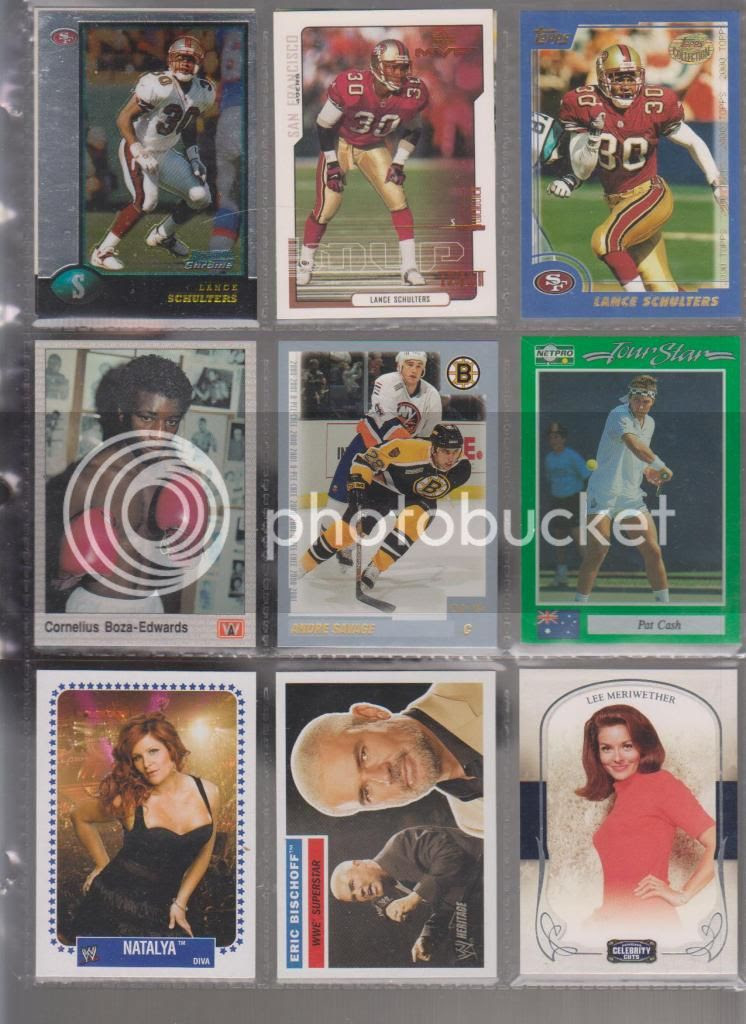 There are a couple of WWE folks with my birthday.  That's kind of sports related, right?  Just to be well rounded, I have a boxer and a Tennis player as well.  Lee Meriwether is a former Miss America and I found that she has my birthday as well.  Or well, that I have hers.

OK, this is just straight vanity, but if your card also mentions May 27th, I include it in the book.  That ever so popular Yankee Stadium Legacy set is here, as are some major league debuts and some Joe DiMaggio streak cards. I will include the backs of these, as I did double up some that just had information on the back. The Carlos Pena and Curt Schilling cards just mention feats done on May 27th and Jim Clancy's kid shares my birthday.  Finding those was pure serendipity and shows that I spend far far too much time reading the backs of baseball cards.

While there is the immortal Lance Schulters in football and the incomparable Andre Savage in hockey, there has never been (and very likely never will be) a Major League baseball player born on May 27, 1975.  The closest I came was Travis Lee. His mother was far too anxious to get him out of her and thus he was born on May 26, 1975.  He never quite panned out, given all his prospect hype, but still had quite a decent career.  I have about 6 pages worth of his cards, but I think one is enough here.

Two days off the pace is Randall Simon, born 5/25/75.  His claim to fame is hitting one of the sausage mascots in Milwaukee with a bat during their little race.  Quite the legacy. 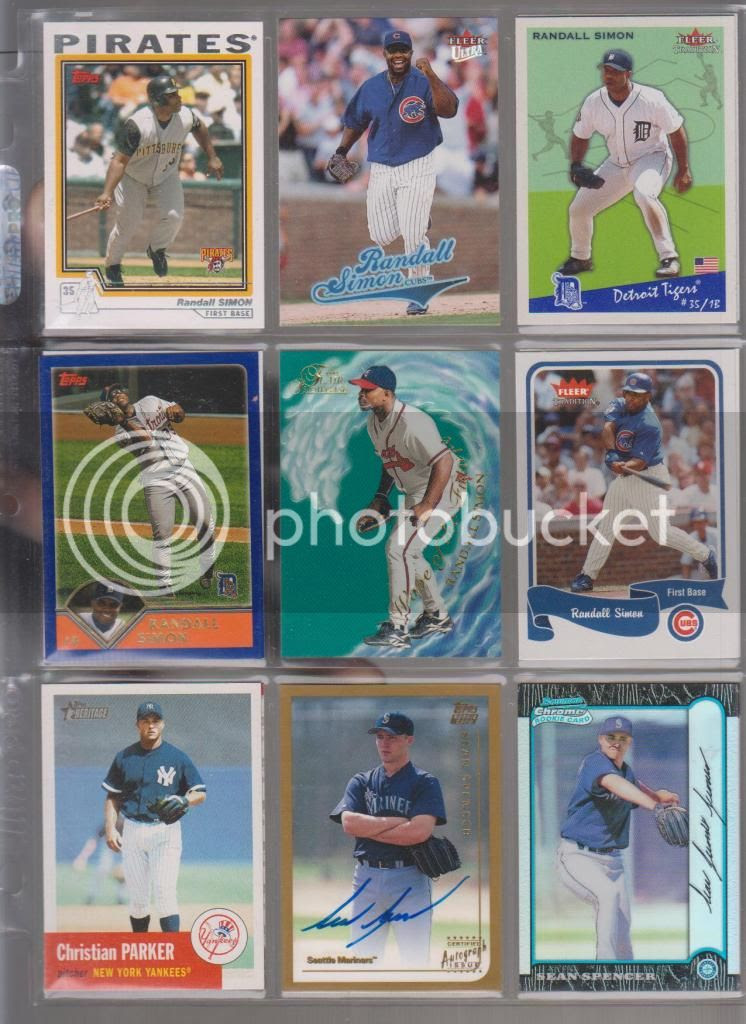 Also two days off the pace was Sean Spencer, but in the other direction.  I am a whole two days older than Sean.  I have an Auto and a refractor of old Sean.  Obviously it is quality over quantity in my Sean Spencer collection.  Last but not least is Christian Parker.  Well, maybe least in term of career as he pitched a whole three innings in the majors and was once suspended for steroid use.  Plus, he was born July 3, 1975, so what the heck is he doing here?  Well, he was born in Albuquerque, NM as was I.  He is the closest in terms of age to someone from my birthplace to make the majors. Obscure?  Well, if you have read this far, you can tell I have an odd attention to detail when it comes to these kinds of things regarding my birthday.  I didn't grow up in Albuquerque, but if I had, I may have played with a major leaguer, all be it one with a 21.00 ERA, but hey, he made the majors didn't he?  I never came close.  (Oh, and now that you are armed with my birthday and place of birth, you can try to steal my identity.  Believe me, when you see my credit score, you'll wish you hadn't.)

So, now that you know it is my birthday, I will be expecting cake (kidding).  But actually, this post sets up tomorrow's, where I show the oddest and most obsessive part of my collection.
Posted by jacobmrley at 5/27/2012 12:30:00 AM

(I've got some ice cream in the freezer. But no cake).

I grab a card or two of players born on my birthday, but that's about it. I really don't have a desire to collect Terry Pendleton cards.