Yesterday was National Baseball Card Day and no, I couldn't get to the National this year (or any year, yet) and no, I didn't get out to my local card shop.  But if you saw my last post, you know that I had plenty to do - I had 925 cards sent from COMC to sort through and revel in.  And that's exactly what I did: 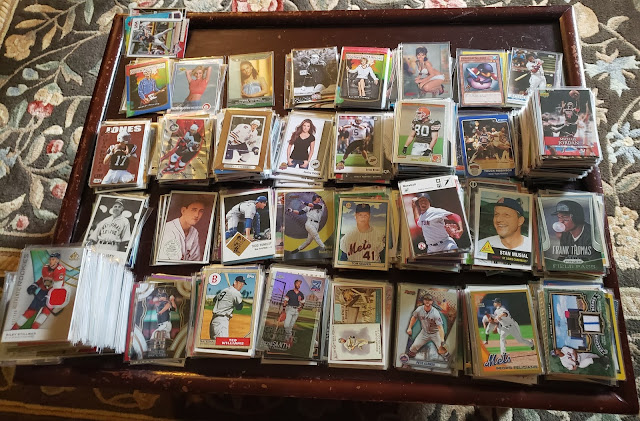 These piles all make sense, to me anyway.  The majority are baseball cards but there are also football, hockey, basketball, bowling, tennis, golf, softball, gaming, movie (James Bond, Batman, and Star Wars among others), music (Beatles and Guided By Voices), and all sorts of Goodwin Champions which include all those things and more. There are three separate piles of Mets cards alone, and also one each for the Saints and the Devils and the Knicks, and a couple of players even got their own piles, Tom Seaver and Todd Hundley (no, really, I am a Hundley super-collector at this point). After that there are Hall of Famers and current stars and retired stars and birthday boys and all-star rookie trophy cards.  It was a fun few hours to go through all these.

I obviously can't highlight and scan 925 cards (103 scans! That would more than double my Seaver memorial post) so I will semi-randomly grab some cards that are either fun or fun to look at or just interesting, to me anyway.  Plus there were a few surprises even for me because after two-plus years, I had forgotten I'd bought them.

The top three here are some multi-player game used cards, one with Gary Carter and Mike Piazza - basically my two favorite players of all time - one with a "Bat Rack" of Mets with the aforementioned Carter and Piazza plus Jose Reyes and Kaz Matsui (remember when he was a thing?) and the third is a glorious mix of 1973 World Series adversaries from the UD Decades set, that one has Tom Seaver and Bud Harrelson along with Reggie Jackson and Bert Campaneris.  THAT is the best card I completely forgot I bought and I was giddy when I saw it.  But it also begs the question, how could I ever forget that card? 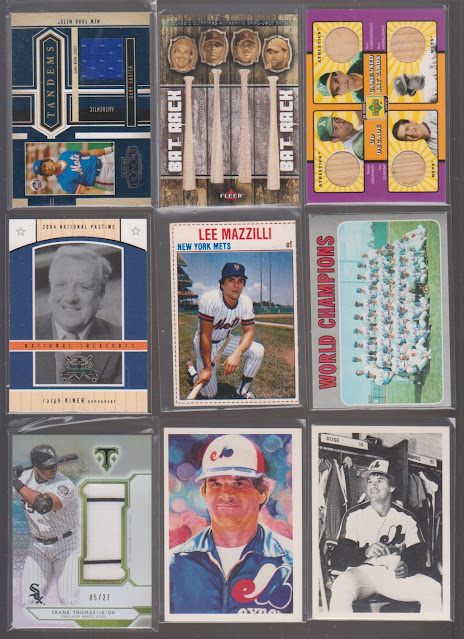 There is also a Ralph Kiner announcer card, a rarity of him with Mets colors, a great Lee Mazzilli from 1979 Hostess (I have the panel with Steve Garvey and Mike Schmidt but I needed it solo), a 1970 OPC Mets World Champions #1 card, a low numbered Frank Thomas jersey card (with pinstripes!) and a pair of one of my favorite unusual uniform subjects - Pete Rose on the Montreal Expos - I now have a complete page of him in French red, white, and blue.

First off is the other side of that Carter/Piazza tandem jersey card.  Now I have to decide if it goes with the Carter collection or the Piazza.  Maybe Carter because he's technically the 'front' of the card?  Then you have two modern Topps Hall of Fame short prints.  I am not a big fan of these but sometimes Topps picks really cool photos for them and these two definitely fit that category.  The Koufax is a magnificent shot of him admiring the scoreboard from his perfect game and the Nolan Ryan is a brilliant candid shot that should/could have been one of his 70s cards.  Topps should only pick pictures of this quality when doing these short prints (alas, they often do not). 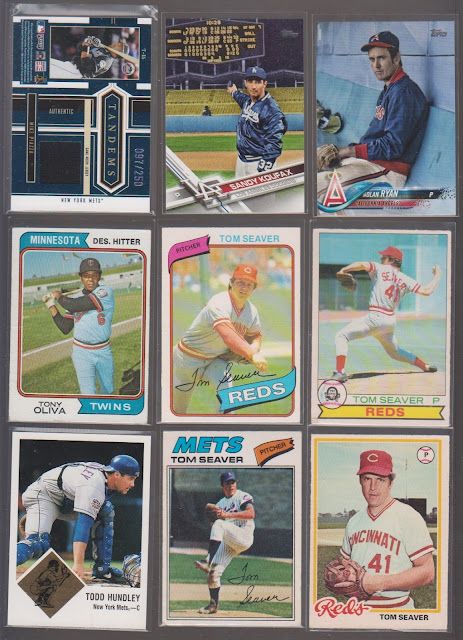 There's also a few fun vintage cards here, a 1974 Tony Oliva with its proud position designation of Des(ignated) Hitter, and a late 70s run of Tom Seaver O-Pee-Chee cards.  That last one in the left corner is a 1998 Fleer Tradition Todd Hundley '63 Classic card numbered to /63.  I told you I was becoming a Hundley super-collector.  I also had my eye on a Piazza version of this card but alas did not pull the trigger on it and now it is gone and I might never see another.  I have put that card in my Needed Nine, you can find that list on the right side margin of the blog.

I teased it in the post from the other day so here is a much better view of the 1952 Andy Pafko #1 I acquired: 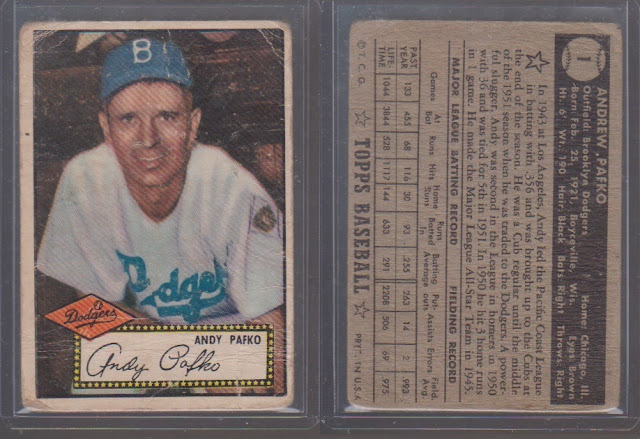 I am not certain why I ever bought into the hype of this card but somehow over the years I did and I just decided I must own this stupid thing.  I ended up getting it during the COMC Black Friday sales and the price was right for this condition.  I think what I really like most is the randomness of someone like Andy Pafko being the first card in their first big set.  He was a good ballplayer but nothing anyone would ever consider a superstar.  Donruss went with Ozzie Smith, Fleer went with Pete Rose, Score went with Don Mattingly, Upper Deck lucked out and chose Ken Griffey Jr. over Gregg Jefferies and Gary Sheffield for their lead off but somehow Topps went with Andy Pafko as card number one. If anyone knows the solid reason why they chose him (I don't recall ever seeing one) please enlighten me.  For now, Andy has a hot date with the other two 1952 star cards I keep protected: my Gus Zernial and my Bob Feller.

I have gotten to the point in my Gary Carter collection where the only cards I don't have are either strange local oddball issues, low numbered monstrosities, or (somewhere in between) just plain old stuff I don't think is worth the money.  I did pull the trigger on a solid gold Gary that I just couldn't pass up during that black Friday sale.  I must say, it is shiny! 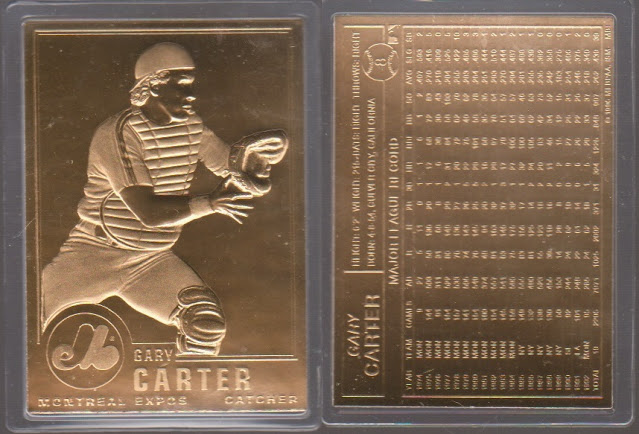 I doubt these Danbury Mint cards will ever be worth much (I also bought a Jerry Koosman one in this batch) but I suppose if times are tough I could melt them down and make fillings out of them or something.

Lastly is a card that probably only means something to me but I am so happy that I got it, the nerd in me is still glowing.  It is a 2019 Goodwin Champions Robert Pollard printing plate, a yellow 1/1. 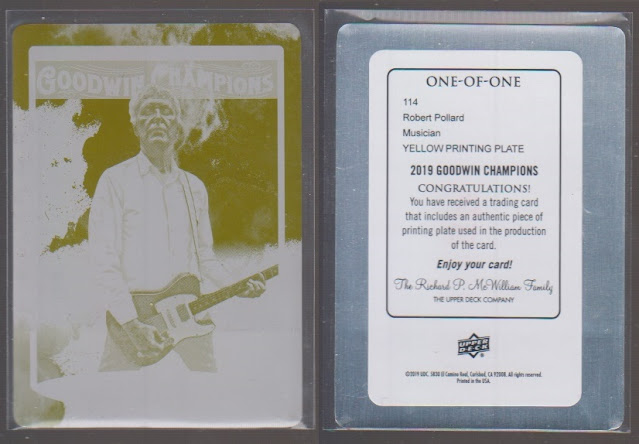 The pandemic left me a lot of time at home to sit and listen to music and Uncle Bob here cranked out something like seven albums (and counting) during 2020 and 2021.  Maybe it is the old man in me, but I don't listen to a lot of music the way I did when I was a younger man but the pandemic did a lot of strange things to all of us so it was nice to have new Guided By Voices albums flying out at the rate they used to in the 1990s.  This card will now be the centerpiece of my Bob Pollard collection from that Goodwin set and I have to trust in myself that I don't become that lunatic who needs to hoard the one-of-one cards.  It helps that I haven't seen any of the others for sale...you know, not that I've checked or anything.  Now excuse me, I have 905 other cards to put in their proper place in my collection.

Very eclectic and reminds me of my tastes (save for the Mets). Good stuff. Puts my anticipated COMC order to shame, which is about 9 buybacks from 1975.

A. I always look forward to the COMC sort... until I realize there are so many cards and not enough time to do it in one sitting.

B. Super jealous of that Pafko. I owned a copy back in the 80's. Traded it for a 1987 Fleer tin set and some rookie cards. One of the worst trades I've ever made.

I see a lot of great cards in just the ones in this post. I have to wait until October to get my ComC order.

I'm sure you can make a few more posts of this haul!

I would never pay what I see that Pafko selling for, but it would be a neat card to own.