There are a few of you raising your eyebrows right now trying to remember a major league pitcher named Pollard who threw a no-no 42 years ago today.  Well, that's not quite the headline I am angling toward here.  The Pollard in question here is Robert, the ultimate lo-fi pioneer, lead singer of Guided By Voices (along with a couple dozen other off-shoots), Uncle Bob to a bunch of us music nerds. One of the things that made me want to start blogging again is that Goodwin Champions included him in their set last year and I went a little crazy...


Okay, how do I explain Robert Pollard and GBV in baseball terms?  Well, if the Beatles are Mickey Mantle (or Willie Mays?) and Nirvana is Bo Jackson (or Sandy Koufax?), then Bob would be Rocky Colavito (or Eddie Yost?) - the under the radar, out of the ordinary but similarly brilliant superstar for which there is a small but intensely devoted following.  Maybe Tim Raines would also work here or perhaps Tony Mullane (or even Ichiro?).  You get the idea.  His music is classic rock but somewhat alien.  It is timeless yet also fixed permanently in the British Invasion vibe and the DIY punk ethic of the early 80s.  Bob once defined his vision for the band as if the Beatles never stopped making music and what it would sound like.  He knocks out dense melodic songs by the score and most of them are under 2 minutes (though they have gotten a little longer as he's gotten older).  He puts out 2-3 albums a year with GbV and half a dozen EPs and side efforts and it is dizzying to keep up with but ultimately very rewarding.  The fans are also insanely devoted and encyclopedic in their knowledge.   Baseball fans and music fans are a mostly round Venn diagram that way when you think about it.  To me, these cards are the wonderful overlap of those two classic obsessions of mine.

Bob Pollard is a fascinating dude with an outrageous story.  He was a regular guy who went to college, played baseball and basketball, became a teacher, and seemed like your normal law-abiding citizen from Dayton OH.  But he always loved music and one day in the early 80s he just decided he was going to be in a band and make rock music and he didn't care what anyone thought of him. So he and his buddies started recording songs in his garage on a boombox and they just kept doing it.  They would play local shows and they became this eclectic local oddity but when people listened to the songs, they realized this guy was actually pretty good.  They were the underest of underground the indiest of indie. But word spread and legends grew and by the mid-90s when this dude was going to college, he discovered their music through a friend who saw I loved the Beatles and thought I should give them a listen.  I have been a fanatic ever since.  And even with a retirement 15 years ago (like most premature sports retirements, it didn't stick), they have come back and are still going very strong. I was looking forward to seeing them  for the seventh time this year, but, well, you know. GbV usually does epic 3 hour shows with a 40+ song set list (they do 100 songs on New Years) but mind you, Bob also comes out with a cooler of beer and drinks and sings until he can't the lyrics so it's usually a glorious train wreck.

My favorite legend of the man, though, is the no-hitter he threw in college - 42 years ago today.  It is just a strange wrench thrown in the machine of a quirky rock and roll story.  If you go to one of their shows, you will see plenty of t-shirts that commemorate this perfectly non-historic but wonderfully odd phenomenon. 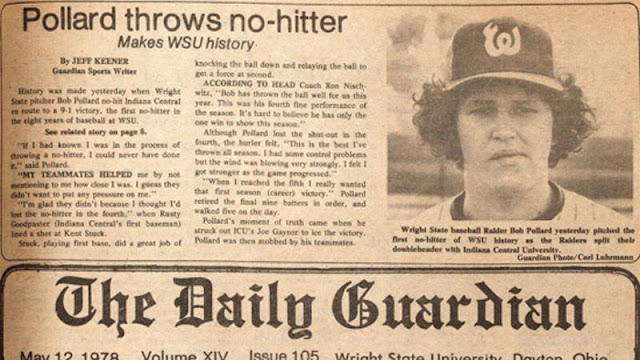 Did Bono or Sting ever throw a no hitter (or the UK equivalent?) I doubt it. Jon Bon Jovi never scored four touchdowns in a game and I am certain Bob Dylan never scored 100 points in a basketball game.  But my ultimate rock hero once pitched a no-hitter in college.

So here are not the five "best" songs but the most indicative.  If you like any or all of these, you have a fighting chance to join the club and be a Guided By Voices covert.  One of these songs is even responsible for my eBay screen name.  Give them a shot, go on, I'll wait. Or don't, I'm not a cop.

If any of you took the time to listen, let me know what you think. And even if you didn't, I know the crazed nature we all collect cards with and for me it definitely is similar with music and I figure if anyone can understand the excitement when two of those worlds collide, it's you guys. Seeing trading cards of the front man of your favorite band (when 98% of folks have never even heard of your your favorite band) was the absolute highlight of my 2019 collecting. Plus the man is a sports legend, he threw a no-hitter!
Posted by jacobmrley at 5/11/2020 05:27:00 PM

I've been getting more into GBV in the last year or two and I was shocked and thrilled to see Pollard pop up in the Goodwin Champions set. Had no idea about the no-hitter, but the rest of their backstory is fascinating to me.

I picked up one of those cards at a show last year, as a gift for a friend of mine who is very much into GBV. Hopefully I'll get to see him at some point and give it to him!

Never heard of this guy or the group or the story of the no-hitter... but I really like the first song (Dayton, Ohio...).

I got to meet him some 20 years ago when GBV headlined our college radio concert. Got my picture with him too. Very laid back, they just wanted to know where the beer was. He also destroyed the mic on stage because he kept twirling it and it would hit the stage repeatedly, lol...

@Rob - Beer and gratuitous destructive mic twirling? That sounds like Bob to me.