I am a man of numbers, rarely, though, nice round numbers.  I like my numbers bumpy and a little crooked (just like my women).  This post is number 99 of this blog and, with a pause in the baseball schedule, I can think of no better way to commemorate that momentous number than with the greatest hockey player of all time, the properly nicknamed Great One, Wayne Gretzky. I am a huge hockey fan and a huger Devils fan, but I am not ashamed to admit I am an unabashed fan of Wayne (I even forgive him for his "Mickey Mouse organization" quote back in 1983, because at the time, he was right). I used to have a much larger player collection of Gretzky and paring it down was not easy.  He takes up a good six pages in my hockey binder, which is a lot of real estate for anyone in any part of my books. At one point I did own an actual OPC Gretzky rookie card, but that was sold long ago to pay the rent.  The reprint you see there fills the void.  That Beehive card in the middle might be my favorite Gretzky of all time.  The picture was taken at the original Winter Classic and totally captures the fun of that day with the smile and the stocking cap.  As for the one next to that one, I usually avoid NY Rangers cards of any kind, but I couldn't get rid of the shiny. Wayne, like any super-duper star, always seems to get multiple cards in each set.  Pulling a Gretzky card when I was a kid was always a thrill.  Who am I kidding, it's still pretty awesome. Gretzky retired with 61(!) scoring records.  My favorite bit of statistical Gretzky trivia is that if you took away all the goals he scored, he would still be the all time leading scorer in NHL history with just his assists.  The NHL retired his number throughout the league.  Some people refer to him as the Babe Ruth of Hockey.  Honestly, it would be more accurate to call Babe Ruth the Wayne Gretzky of Baseball. That Upper Deck Masterpiece card in the upper left corner is a classic picture from his trade to the LA Kings.  In fact, his famous 1988 Topps card uses the same picture. I've always loved the design of that set - so 80's yet so timeless.  Anyway, also on this page are holograms from the 1989-90 Upper Deck hockey set.  When that set first came out it was a very big deal and these things were the biggest deal in it - shiny and rare - I find them in dime boxes now.  Oh, the march of time. This is the back of the last page.  As you can see, those holograms have blank backs.  I mean, completely blank, no writing at all.  I am at a loss trying to think of any recent cards or stickers or anything with blank backs; there is always some kind of writing or ad or copyright information on them.  If anyone can think of something from the last decade or so that is completely blank, let me know.  There are two things covering up those blank backs.  One is a homemade card from the box of a recent OPC release.  The other is a business card from an eBay seller that uses The Great One (I wonder if he gets any kickback from that?).  In my hopeless endless collecting nature, I like to keep interesting business cards from real life and the virtual world. As I have mentioned before, I love sports jerseys and my favorite jerseys are hockey jerseys.  I own half a dozen or so.  As I have also noted in the past, I like the vague and unusual, especially as it applies to players in odd uniforms.  Wayne Gretzky is known for playing for the Oilers, Kings, and even the Rangers.  What most people forget is that he also played for the St. Louis Blues for half a season...35 glorious games.  The absolute highlight of my entire sports jersey collection is a St. Louis Blues #99 circa 1995: 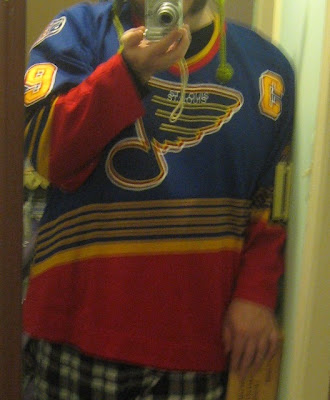 Isn't that just the ugliest thing you have ever laid eyes on?  I've had this thing for 5 years now and when the weather gets cold, it becomes a second skin.  It certainly gets noticed; I have had people chase me down in the supermarket and at concerts to get a better look at it and to talk to me about it.  A friend's wife said (jokingly, I think) she was gonna leave her husband because I owned this jersey (moral of that story: always date women who like hockey).